From COP 17 in Durban Africa, with the Granddaughter of Mahatma Ghandi

2009.  Press conference, in BanMr. de Boer later presented Mr. Scott with a hand written invitation to His Holiness Pope Benedict XVI urging him to come to Copenhagen in December to aid in the realization of a ‘fair and effective conclusion’ to stalled climate negotiations,in order to safeguard the future of humanity and life on Earth. 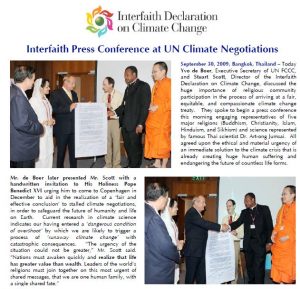 How Stuart’s work, with NGO’s began: 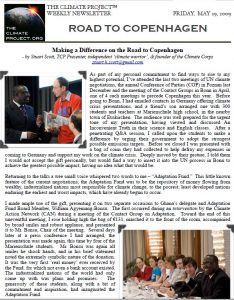 Making a Difference on the Road to Copenhagen, by Stuart Scott, TCP Presenter, independent ‘climate warrior’, & founder of the Climate Corps

‘As part of my personal commitment to find ways to rise to my highest potential, I’ve attended the last two meetings of UN climate negotiations, the annual Conference of Parties (COP) in Poznan last December and the meeting of the Contact Groups in Bonn in April, one of 4 such meetings to precede Copenhagen this year. Before going to Bonn, I had emailed contacts in Germany offering climate crisis presentations, and a friend’s son arranged one with 300 students and teachers at Marienschule high school, in the nearby town of Euskirchen.

‘The audience was well prepared for the urgent tone of my presentation, having viewed and discussed An Inconvenient Truth in their science and English classes.  After a penetrating Q&A session, I called upon the students to make a difference by urging their government to adopt the strongest possible emissions targets.

‘Before we closed I was presented with a bag of coins they had collected to help defray my expenses in coming to Germany and support my work on the climate crisis. Deeply moved by their gesture, I told them I would not accept the gift personally, but would find a way to insert it into the UN process in Bonn to achieve the greatest possible impact, having no idea what that would be.

‘Returning to the talks a wee small voice whispered two words to me – “Adaptation Fund.” This little known feature of the current negotiations, the Adaptation Fund was to be the repository of money flowing from wealthy, industrialized nations most responsible for climate change, to the poorest, least developed nations enduring the earliest and worst impacts, which have already begun to occur.

‘I made ample use of the gift, presenting it on two separate occasions to Ghana’s delegate and Adaptation Fund Board Member, William Agyemang-Bonsu. The first occurred during an intervention by the Climate Action Network (CAN) during a meeting of the Contact Group on Adaptation. Toward the end of this uneventful meeting, I rose holding high the bag of 131 Euros, marched it to the front of the room, accompanied by broad smiles and robust applause, and presented it to Mr. Bonsu, Chair of the meeting.

‘Several days later at a press conference I had arranged, the presentation was made again, this time by four of the Marienschule students. Mr. Bonsu was again all smiles he shook hands, and in his brief statement noted the extremely symbolic nature of the donation.

‘It was the very first ‘real money’ ever received by the Fund, for which not even a bank account existed.  The industrialized nations of the world had only come up with was plans and promises. The generosity of these students, along with a bit of commitment and inspiration, had inaugurated the
Adaptation Fund.’

Letter to His Holiness, Pope

I have come to you bearing a handwritten invitation from Yvo de Boer, Executive Secretary of the UN FCCC, to come to Copenhagen in December. I also come under Instructions from the Almighty with a plea from my heart and soul. I am not on a diplomatic mission, but rather a spiritual mission. I am following Instructions I was given in a Visitation on July 18th of this year when I was Instructed to gather the religious leaders of Earth into a ‘trusted messenger’ to aid in the deliverance of humanity and life on Earth from the catastrophic effects of ‘runaway climate change’ which may render the Earth uninhabitable.

The time is short for us to avert an irreversible process with horrific consequences. The signs and suffering we are seeing today are early affects of what will occur increasingly in the next few generations. I was Instructed by the Most Holy One to come to Rome to speak you Your Holiness in person and deliver the message, “The flock is in mortal danger. The shepherd must come at once.”

First, please, Your Holiness, come to Copenhagen in December. The world is sorely in need of your guidance and spiritual leadership in addressing what is essentially a spiritual problem.

Second, Your Holiness is perhaps the most trusted voice on Earth. Issue an urgent climate call to the world in your coming Papal Encyclical. Involve the Holy See in the Interfaith Declaration on Climate Change in Copenhagen. If Your Holiness cannot come to Copenhagen, I beg you to send a high level emissary of the Holy See to participate in our call to the nations of Earth.

Third, I was specifically Instructed to perform what seemed to me at the time an impossible task. When the Voice so Instructed me I asked, “Why have You chosen me? I have neither the fame nor the means of reaching the people I must reach.” To this the Reply came, “Do not question Me. Do not doubt the Power of My Holy Will. Just do as you have been Asked.” It is difficult to express this experience in terms people can understand.

The Voice comes as if in a ‘loud whisper’, like none other I have ever experienced. I am unable to tell anyone of this experience without weeping. This task which I have been Asked to perform is to assemble a climate summit of the most respected religious leaders on Earth. Much to my amazement, His Holiness the Dalai Lama has indicated a willingness to participate through his assistant, conditioned upon Your Holiness’ participation.

I am confident that other of the highest spiritual leaders of Earth will participate if Your Holiness will agree to do so. The date and time are subject to your availability as well as that of the Dalai Lama. You alone have the opportunity to realize this hugely important conclave of religious leaders for the survival of humanity and life on Earth. The Interfaith Declaration on Climate Change, by its humble origin, is neutral ground, but holy ground, upon which the religions of the world can assemble to change the destiny of humanity. But you have the power to invoke immeasurable change.

Forgive the huge request that I make. I am obeying the Commandment of the Voice that has Spoken to me, with no personal attachment to the outcome, and no intention of personal gain. From the depths of my soul I thank you for hearing my request.

God is One,
Stuart Scott