Deforestation is clearing Earth’s forests on a massive scale, often resulting in damage to the quality of the land. Forests still cover about 30 percent of the world’s land area, but swaths half the size of England are lost each year. The world’s rain forests could completely vanish in a hundred years at the current rate of deforestation.

The biggest driver of deforestation is agriculture. Farmers cut forests to provide more room for planting crops or grazing livestock. Palm oil development in SE Asia is quickly resulting in massive deforestation.  The driver is our consumption of the oil in everything from candy bars and cosmetics, to soaps and shampoos,  Often farmers and corporations will clear acreage by cutting down trees and burning them in a process known as slash and burn agriculture. 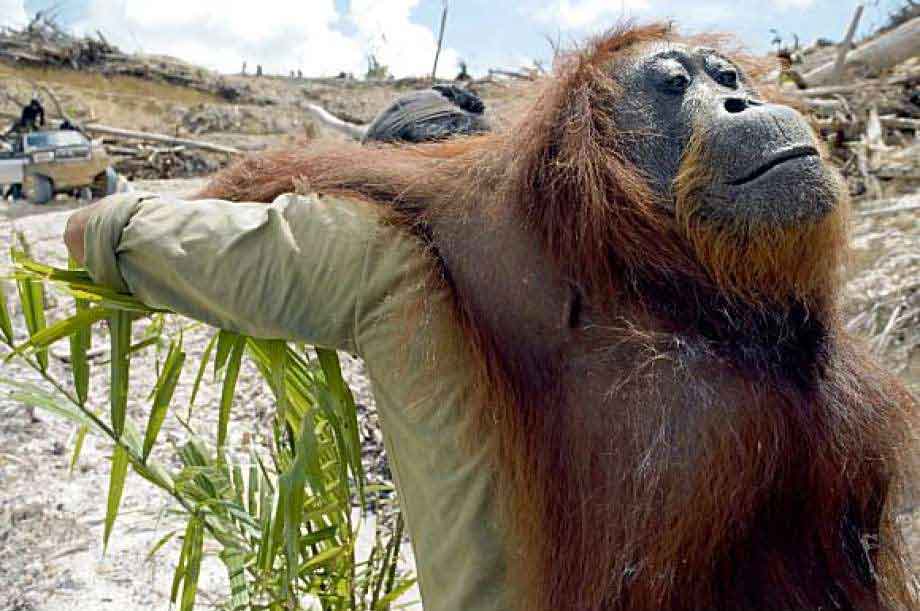 Deforestation of rainforests in the Amazon, Indonesia, and elsewhere is a significant driver of biodiversity loss, from large mammals to as yet undiscovered plants, animals and insects, all of which have a place in the complex web of life.  Our short-sighted quest for profit and convenience is destroying the biosphere upon which we depend.

Logging operations, which provide the world’s wood and paper products, also cut countless trees each year. Loggers, some of them acting illegally, also build roads to access more and more remote forests—which leads to further deforestation. Forests are also cut as a result of growing urban sprawl as land is developed for dwellings.

Some deforestation is caused by a combination of human and natural factors like wildfires and subsequent overgrazing, which may prevent the growth of young trees.

Deforestation has a negative impact on the environment. The most dramatic impact is a loss of habitat for millions of species. Eighty percent of Earth’s land animals and plants live in forests, and many cannot survive the deforestation that destroys their homes.

Deforestation also drives climate change. Forest soils are moist, but without protection from sun-blocking tree cover, they quickly dry out. Trees also help perpetuate the water cycle by returning water vapor to the atmosphere. Without trees to fill these roles, many former forest lands can quickly become barren deserts.

Removing trees deprives the forest of portions of its canopy, which blocks the sun’s rays during the day, and holds in heat at night. This disruption leads to more extreme temperature swings that can be harmful to plants and animals.

The most feasible intervention to deforestation is to carefully manage forest resources by eliminating clear-cutting to make sure forest environments remain intact.  The cutting that does occur should be balanced by planting young trees to replace older trees felled. The number of new tree plantations is growing each year, but their total still equals a tiny fraction of the Earth’s forested land.

We as consumers must become more aware of what goes into the products we consume, demand certified sustainably sourced raw materials, like palm oil, lumber, and even cacao, a major driver of deforestation in parts of Africa.

If we are willing to pay a little more for our products to protect Nature, we can reshape how the global economic system functions.  As long as our prime directive is “buy cheap and sell dear” we will continue to destroy that upon which we depend.