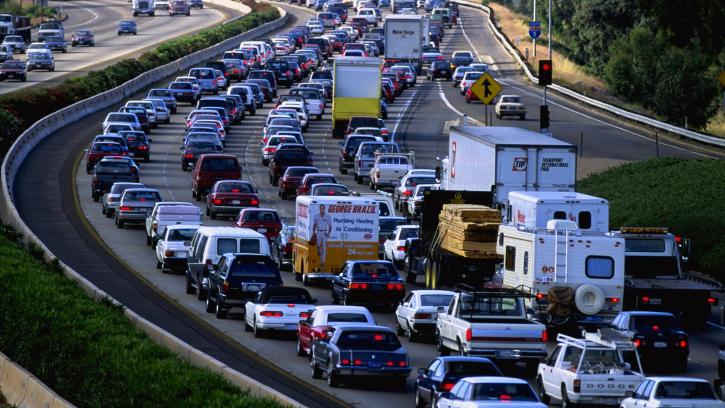 Air pollution is the release of substances into the air that are detrimental to both human health and the well-being of the biosphere as a whole. Most air pollution comes from energy use and production. Burning fossil fuels releases gases and chemicals into the air. And in an especially destructive feedback loop, air pollution not only contributes to climate change but is also exacerbated by it. Air pollution in the form of carbon dioxide and methane raises the earth’s temperature. Another type of air pollution, smog, is then worsened by that increased heat. Smog forms when the weather is warmer and there’s more ultraviolet radiation. Climate change also increases the production of allergenic air pollutants including mold (thanks to damp conditions caused by extreme weather and increased flooding) and pollen (due to a longer pollen season and more pollen production).

These two are the most prevalent types of air pollution. Smog, or ground-level ozone, occurs when emissions from combusting fossil fuels react with sunlight. Soot, or “particulate matter,” is made up of tiny particles of chemicals, soil, smoke, dust, or allergens, in the form of gas or solids, which are carried in the air. The sources of smog and soot are similar. Both come from cars and trucks, factories, power plants, incinerators, engines—anything that combusts fossil fuels such as coal, gas, or natural gas. The tiniest airborne particles in soot—whether they’re in the form of gas or solids—are especially dangerous because they can penetrate the lungs and bloodstream and worsen bronchitis, lead to heart attacks, and even hasten death.

Smog can irritate the eyes and throat and also damage the lungs—especially of people who work or exercise outside, children, and senior citizens. It’s even worse for people who have asthma or allergies—these extra pollutants only intensify their symptoms and can trigger asthma attacks.

These are either deadly or have severe health risks even in small amounts. Almost 200 are regulated by law; some of the most common are mercury, lead, dioxins, and benzene.  These are also most often emitted during gas or coal combustion, incinerating, or in the case of benzene, found in gasoline.  Benzene, classified as a carcinogen by the EPA, can cause eye, skin, and lung irritation in the short term and blood disorders in the long term. Dioxins, more typically found in food but also present in small amounts in the air, can affect the liver in the short term and harm the immune, nervous, and endocrine systems, as well as reproductive functions. Lead in large amounts can damage children’s brains and kidneys, and even in small amounts it can affect children’s IQ and ability to learn. Mercury affects the central nervous system.

Polycyclic aromatic hydrocarbons, or PAHs, are toxic components of traffic exhaust and wildfire smoke. In large amounts, they have been linked to eye and lung irritation, blood and liver issues, and even cancer. In one recent study, the children of mothers who’d had higher PAH exposure during pregnancy had slower brain processing speeds and worse symptoms of ADHD (Attention Deficit and Hyperactivity Disorder).

By trapping the earth’s heat in the atmosphere, greenhouse gases lead to warmer temperatures and all the hallmarks of climate change: rising sea levels, more extreme weather, heat-related deaths, and increasing transmission of infectious diseases like Lyme. According to a 2014 EPA study, carbon dioxide was responsible for 81 percent of the country’s total greenhouse gas emissions, and methane made up 11 percent. Carbon dioxide comes from combusting fossil fuels, and methane comes from natural and industrial sources, including the large amounts that are released during oil and gas drilling. We emit far larger amounts of carbon dioxide, but methane is significantly more potent, so it’s also very destructive.

Another class of atmospheric pollutants, hydrofluorocarbons (HFCs), are thousands of times more powerful than carbon dioxide in their ability to trap heat. They also were implicated as the principal cause of the thinning of the protective ozone layer around the Earth. In October 2016, more than 140 countries reached an agreement to reduce the use of these chemicals—which are used in air conditioners and refrigerators—and find greener alternatives over time.

However there has been recent concern after increased levels of banned substances were detected. A new analysis of long-term atmospheric measurements by NOAA scientists shows emissions of CFC-11 are rising again. The US National Oceanic and Atmospheric Administration (NOAA) said the increase is most likely from new, unreported production from an unidentified source in East Asia. This ‘cheating’ on the Montreal Protocol represents both a threat to both the protective ozone layer shielding all of life from harmful ultraviolet radiation (UV) from the sun as well as increasing the rate of warming of the Earth, and thus climate change.