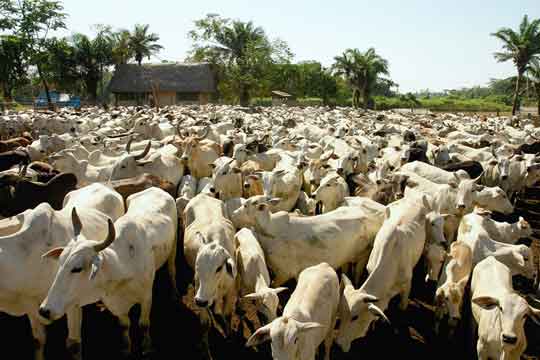 This one is very different, caused not by geological factors, but by a single species – humans. In aggregate, we and our livestock now consume somewhere between 25-40% of the planet’s entire ‘primary production’, that is, the solar energy captured by plants on which life depends. We have become a voracious top predator around the globe.

One estimate suggests that, by weight, 97% of the world’s vertebrate land animals are now either humans or our livestock – just 3% are wild. Another consequence of this domination is that we are driving evolution in domesticating crops and animals, but also through genetic modification and even by how we maintain (or neglect) wildlife reserves.

The intricate web of life, knit over hundreds of millions of years, has been changed irreversibly in the last 10,000 years by humans intentionally and accidentally relocating species around the world. These alien species can devastate ecosystems without defenses – from rats devouring albatross chicks in their nests to snakehead fish decimating native species across the US.

But of all factors, climate change threatens the most serious loss of biodiversity of all. Few plant species can adjust their range in response to rapid climatic change. Animal species can sometimes move their range, but if they move upslope on mountains to familiar climatic zones, eventually they reach the top and populations decline or disappear.

The spread of disease vectors for both animals and plants is worsened by climate change and human mobility as we carry pests and microbial hitchhikers around the globe.

One of the worst threats to biodiversity is the trade in endangered species. The profit motive as well as governmental neglect and sometimes corruption bear sad witness to our selfishness and shortsightedness.

Addressing the biodiversity crisis is the subject of many of the 13 Interventions recommended by the Alliance of World Scientists. These are discussed at various points on the page.