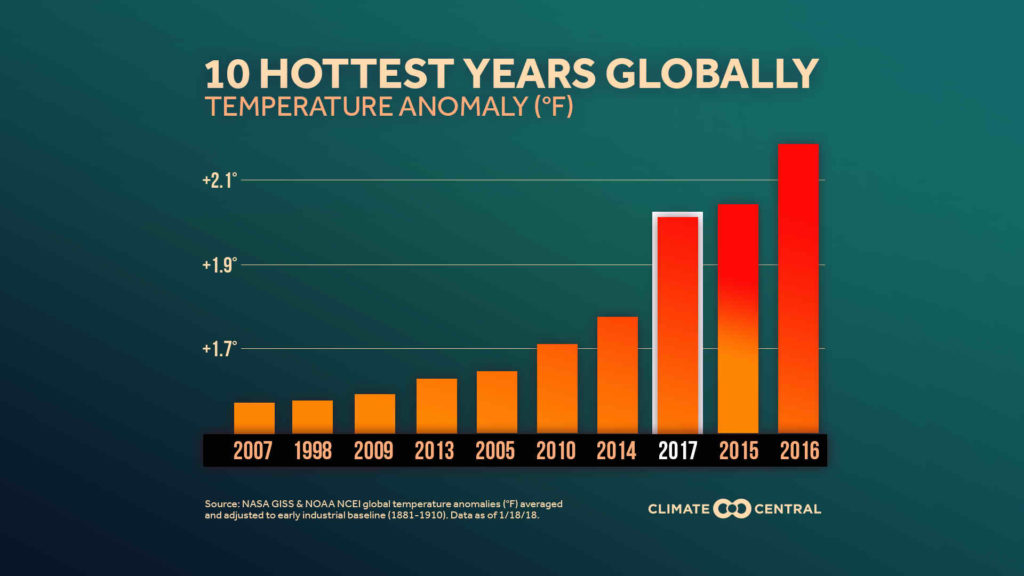 Climate change has already begun to transform life on Earth.  Without action, the impacts of climate change threaten to catastrophically damage our world.

Higher Temperatures
Earth’s temperatures in 2015, 2016 and 2017 were the hottest ever recorded (source: NASA). This is upsetting the delicate balance of ecosystems, and the plants and animals that inhabit them.

Changing Landscapes and Wildlife Habitat
Rising temperatures and changing patterns of precipitation are changing where plants grow, and in the case of our oceans, encouraging the proliferation of invasive species that impact native ocean habitat. As landscapes and habitats literally shift, wildlife must quickly adjust. Experts predict that one-fourth of Earth’s species will be headed for extinction by 2050 if the warming trend continues at its current rate.

Increased Risk of Storms, Droughts, and Floods
Climate change is intensifying drought, storms, and floods around the world. Where nature has been destroyed by development, communities are at risk from these intensified climate patterns. Scientists around the world are studying how nature can be a buffer for these intensified weather patterns, and are working with leaders and communities in many nations to implement solutions that make a difference for nature and people.

Communities at Risk
In the U.S. alone, half of its residents live within 50 miles of the coast. Worldwide, it was approximated that about 40% of humanity lived within 60 miles of the ocean in 2016. About 100 million people live within three feet of sea level. Sea level rise associated with climate change has begun to displace tens of millions of people in low-lying areas – especially in developing countries. Inhabitants of some small island countries that rest barely above the existing sea level are already abandoning their islands.

Economic Impact
The true economic impact of climate change is hard to predict but will be severe. Many key economic sectors – from fishing to energy to water utilities – will feel long-term impacts of climate change. From warming seas, which encourage proliferation of non-native species that impact fishing industries, to rising temperatures, which impact energy usage around the world, our shifting global climate will force many industries to move quickly to adapt to change. Even recreation and tourism industries are weather-dependent – with many planning based on historic weather patterns, which climate change will disrupt. As we move into an era in which climate change impacts are all around us, adapting to these changes quickly will be key for all sectors of the global economy.

INTERVENTIONS
There are too many possible interventions to name. But just a few are listed below:

Plus many of the items on our Learn & Act page are in fact climate-relevant interventions. These are discussed at various points on this page.