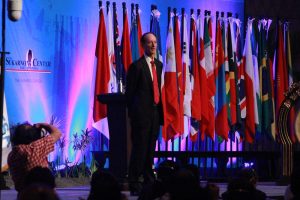 About Our Founder
Stuart H. Scott

Stuart H. Scott was an American environmentalist and educator known for his creativity in communicating the urgency and severity of the impact of the current ‘growth’ economic system on climate, habitability of Earth, and society. Stuart was the ultimate ‘systems thinker,’ with training in a variety of scientific fields; work experience in finance, education and information systems; as well as extensive investigative immersion in Nature, cognitive psychology and expert presentation skills.

Stuart grew up in New York, NY, studied mathematics and Computer Science at Columbia University, and, after a stint teaching middle school, toured the United States as a minstrel and street performer. Back in NY, he continued his career, working for major financial institutions (including a stint as a stockbroker for Merrill Lynch). After earning a Masters of Science in Computer & Information Science, from the University of Florida (Gainesville), Scott worked for IBM and settled in Hawaii, where he honed his IT skills while teaching philosophy, critical thinking, and statistics. After seeing VP Al Gore’s movie, An Inconvenient Truth, in 2006, he became deeply involved with Gore’s Climate Project.

Principally known for his visibility at UN-sponsored climate negotiations, or COPS and extensive video interviews, his thesis is that modern economies, their unrelenting emphasis on growth, privately owned central banks exponentially expanding the money supply, are akin to a cancer with humanity as its host, that will inevitably destroy the host. Individual people are analogous to cells in a single human host that has a metastasizing cancer. Stuart has attended ten of the last thirteen COP’s or Conference of Parties of the United Nations talks. In 2018, Stuart brought Greta Thunberg and her father, Svante Thunberg, to COP-24 in Poland, from which Greta’s unwaveringly clear message to world leaders was amplified and her position cemented as the preeminent spokesperson for youth and future generations, thus increasing her profile, worldwide, leading to his nomination of Greta for the Nobel Peace Prize.

Stuart succeeded in convincing famed climate scientist James Hansen, former Director of NASA’s Goddard Institute for Space Science, to attend the climate talks that he had previously shunned as an ineffective sham, first to COP-21 in Paris (2015), again to COP-23 in Bonn, Germany (2017), and also to COP-25 in Madrid, Spain (2019). At COP-21, Hansen summarily dismissed the negotiations as ineffective by design, saying that it would instead ‘screw the next generation and all future generations’.

He views humanity’s dominant, relentless, money-motivated obsession with ‘making more money’ as an end in itself, to be a thought form or meme destroying its host, since the stability and viability of the ecosphere is constantly degraded and undermined in the pursuit of ‘making money’ by people and the artificial ‘corporate persons’ that have been created and arguably favored by national governments. In this regard, he considers himself a ‘memetic engineer’ attempting to alter the meme before it destroys the collective host – humanity.

His persistence and unwavering focus is on revealing the disastrous flaws in the current Neo-Classical economic system and promoting Ecological Economics (also known as Steady-State-Economics) as alternative models for a sustainable human economy. His work has brought him into contact with a wide range of notable people, including leading integrative thinkers across many domains including science, politics, economics and spirituality. He prefers to work unfunded due to the ‘editorial bias’ and control that funding brings, either implicitly or explicitly.

Over time, Stuart has allied himself with a wide variety of Non-Governmental Organizations (NGOs), and is credited with coalescing the ‘faith community’ within the UNFCCC climate negotiations. Since ‘quitting his day job’ in 2008, he has attended most of the annual COP meetings, where he became skilled at creating press conferences, eventually reshaping the facilities provided by the UN into a sort of ‘talk show’ and distributing these on YouTube.

Stuart has interviewed Noam Chomksy, Dr. Peter Wadhams, Dahr Jamail, as well as Greta and Svante Thunberg. Relying on volunteer help, he was known for his active use of media, having founded ClimateMatters.TV,  ScientistsWarning.TV and most recently FacingFuture.TV.

In spite of his battle with cancer, Stuart continued to be driven by his passion for climate activism and ecological investigation. Stuart passed away at his home in Honolulu on July 15th, 2021.

Here is a list of further links about Stuart: