“If one cares about the environment, one must care about eating animals … Someone who regularly eats factory-farmed products cannot call himself an environmentalist without divorcing that word from its meaning.”   – Jonathan Safran Foer, Eating Animals

The numbers don’t lie. Animal agriculture and meat consumption are significant contributors to climate change. Some are saying it’s now on track to be among the world’s biggest contributors to climate change, outpacing the fossil fuel industry. Even using sustainable farming practices, we cannot pretend that the resulting greenhouse gases from grass-fed beef and poultry are insignificant. A recent Guardian article titled Avoiding meat and dairy is ‘single biggest way’ to reduce your impact on Earth discusses this in depth. In short, your food choices matter now more than ever. A recent study says the human diet is causing ‘catastrophic’ damage to planet. 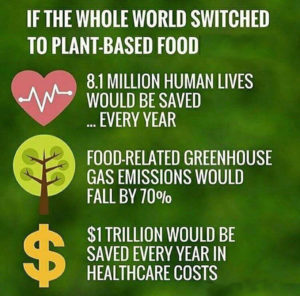 Further, according to ClimateNexus.org: Animal agriculture puts a heavy strain on many of the Earth’s finite land, water and energy resources. In order to accommodate the 70 billion animals raised annually for human consumption, a third of the planet’s ice-free land surface, as well as nearly sixteen percent of global freshwater, is devoted to growing livestock. Furthermore, a third of worldwide grain production is used to feed livestock. By 2050, consumption of meat and dairy products is expected to rise 76 and 64 percent respectively, which will increase the resource burden from the industry. Cattle are by far the biggest source of emissions from animal agriculture, with one recent study showing that in an average American diet, beef consumption creates 1,984 pounds of CO2e annually. Replacing beef with plants would reduce that figure 96 percent, bringing it down to just 73 pounds of CO2e.

There’s no other choice. Meat and dairy production in the countries where the top 35 companies dominate must be significantly reduced.  says Josh Gabbatiss, Science Corespondent at the Independent. It is clear that reducing meat and dairy consumption has become an urgent issue. Also, there is no question that limiting meat consumption would benefit the planet.  According to many researchers including the Lancet Commission, factory farming and big agricultural practices are not sustainable and we are already heading for a food crisis. In the following On Contact video this is explained in detail:

At the same time, eating a predominately plant-based diet has also been shown to be better for the health, longevity, and overall fitness of individuals. Numerous studies have shown that reducing meat intake results in lower disease rates and life prolonging benefits. The vegan diet has even been shown to reverse cardiovascular disease.

Further, it is the position of the Academy of Nutrition and Dietetics that vegetarian diets can provide health benefits in the prevention and treatment of certain health conditions, including atherosclerosis, type 2 diabetes, hypertension, and obesity.  –  AND

Additionally, research from the World Health Organization (WHO) is now connecting meat consumption with cancer.  The WHO recently categorized red and processed meats as class 2a carcinogens. Another study discusses the harm done to children who consume meat at an early age. Research shows that people who eat red meat are at an increased risk of death from heart disease, stroke or diabetes. … Diets low in nuts, seeds, seafood, fruits and vegetables also increase the risk of death.  – NIH

So, what can you do? Everyone is on a very personal journey when it comes to nutrition and diet. Not everyone can become a strict vegan and certainly not overnight. Many health experts are advising that people begin slowly, when and where it makes the most sense for them to reduce their meat consumption.

Anyone can begin simply by avoiding meat for at least one day per week.  If that is not possible, perhaps just give it up for one meal a day. Everyday Health lists 6 Vegan Habits Everyone Should Adopt (Without Giving Up Meat). There are many ways to start incorporating exciting and delicious alternatives to meat without getting completely stressed out!

Worried about protein? Don’t be. It turns out that vegans actually have higher blood protein and albumin levels than those who consume meat, eggs, and dairy regularly. Know your sources of vegan proteins, B12, and multivitamins/minerals and forget about it. Fermented foods are always recommended. Additionally, many plant sources, nuts and legumes contain more protein than meat and this protein is much more bio-available. This means your body doesn’t have to take days and even weeks, trying to digest it, as with meat.

For help getting started with vegetarian meals and recipes, please visit: Vegetarian Recipes, EartherAcademy.com and Vegan.com. These resources provide lots of ways to help you get started. Don’t overthink it at first, just give it a try and see what happens. Additionally, you can go vegan with the Terminator and the Gladiators in the Game Changers film.

For more on this topic, please visit the blog “Meat, To Eat or Not to Eat”.