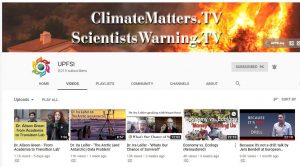 Stuart has many videos, from
ClimateMatters.TV, at YouTube.
Too many to share at once.
A select few, by category or topic:

Recent work.
The crisis at hand:

Here in Part 1 of Stuart Scott’s conversation with Dr. Ira Leifer, atmospheric scientist and researcher, in this fascinating discussion of the desperate portends of our inability as a society to deal with the knowledge that we have destabilized the climate system. Part 2 can be viewed at  here.

The bad news, according do Dr. Leifer, is that only a few thousand humans may survive at the poles. The ‘good news’ is that some of life is likely to survive (for instance ants and cockroaches) since the Earth has proven so resilient over the eons of time since life evolved.
———-

Dr. Chomsky is one of the five most
cited names in intellectual discourse,
along the lines of Plato, Marx, etc:

Scientists Warning.TV interviewed Noam Chomsky shortly before COP-24, the UN climate negotiations which took place in Katowice, Poland the first two weeks of December. The COP itself ended as expected, with little progress and yet another kick of the can down the road. Noam’s allusion to Nero in this video is quite apt.
———-

There are so many great videos on
or about or by Stuart, but this has
got to be one of the most canonical:

On the first day of COP-24, the annual UN climate negotiations, Stuart Scott and Victoria Hurth teamed up to discuss the World Scientists’ Warning to Humanity followed by the part that business can and must play to reverse disastrous current ecological and climate trends that threaten life on Earth.

Stuart Scott participated in ten of the last thirteen COP Conferences, including the last one in Poland, which Greta Thunberg attended. 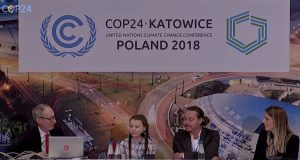 Today our little climate giant, Greta Thunberg, is joined by her father, Svante to talk about her path from an unknown Swedish school girl to an internationally recognized climate leader. If governments don’t give a damn about her future, why should she give a damn about their laws! Svante discusses how Greta’s passion for the truth about climate has changed the family’s lives. Very compelling.
———- 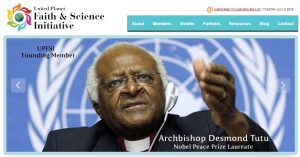 ‘Faith & Science Declaration on Climate Change
The nurturing and respect for Life is a central doctrine of all faiths on Earth. Yet today we are endangering life on Earth with unacceptably high and rising levels of greenhouse gas emissions. These gases are destabilizing the global climate system, heating the Earth, acidifying the oceans, and putting both humanity and all living creatures at unacceptable risk.

‘The extraordinary delicacy of Nature’s balance is becoming increasingly apparent, even as human actions inflict ever larger, more dangerous and potentially irreversible changes on the indivisible web of atmosphere, earth, ocean and life that is creation. Today our faiths stand united in their call to care for the Earth, and to protect the poor and the suffering. Strong action on climate change is imperative by the principles and traditions of our faiths and the collective compassion, wisdom and leadership of humanity (text continues at link)’. 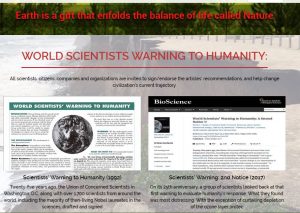 Scientist Warning to Humanity, hardly needs an introduction.  But it is nevertheless, part of the corpus, of Stuart’s work. 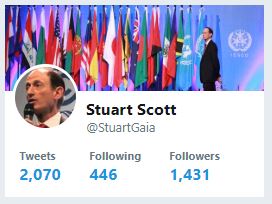 Stuart has been on twitter, for years,
increasingly in the last year.  You can find
his tweets, at StuartGaia.   Examples here:

We've allowed a monster to grow in our midst taking over land & pushing out all life in its way-all at behest of UNSEEN HAND OF THE MARKET aka money & unchecked corporate power w/legally corrupt governance structures to enforce cancerous affliction that CONSUMER SOCIETY's become. pic.twitter.com/Z5Lx3V1k2f

If it is humanly possible to get
through this cancer I will do it.

I am not one to give up easily.

In fact, I will use the cancer
to make me stronger.

And I will use it to make my message more
compelling. I have nothing more to lose. pic.twitter.com/NodbAOLj0K

Stuart never was active much on Facebook, but respected advice that he got:  ‘If you are NOT on Facebook, then you are not an activist’.  This might be true for many, but never really fit Stuart.  Nevertheless, he acquiesced.  His Facebook is at, StuartGaia, his namesake.

“Stuart, I’ve been coming to COP for years, and
NO ONE speaks like you. I never miss your programs
and they keep me coming back. Thank you.”