Present policies of most Governments, with a few predictable exceptions, concentrate on the desperate need to get to zero carbon emissions as soon as possible. This is a necessary but not sufficient objective. There is strong evidence from the Keeling curve below, about the difficulty. 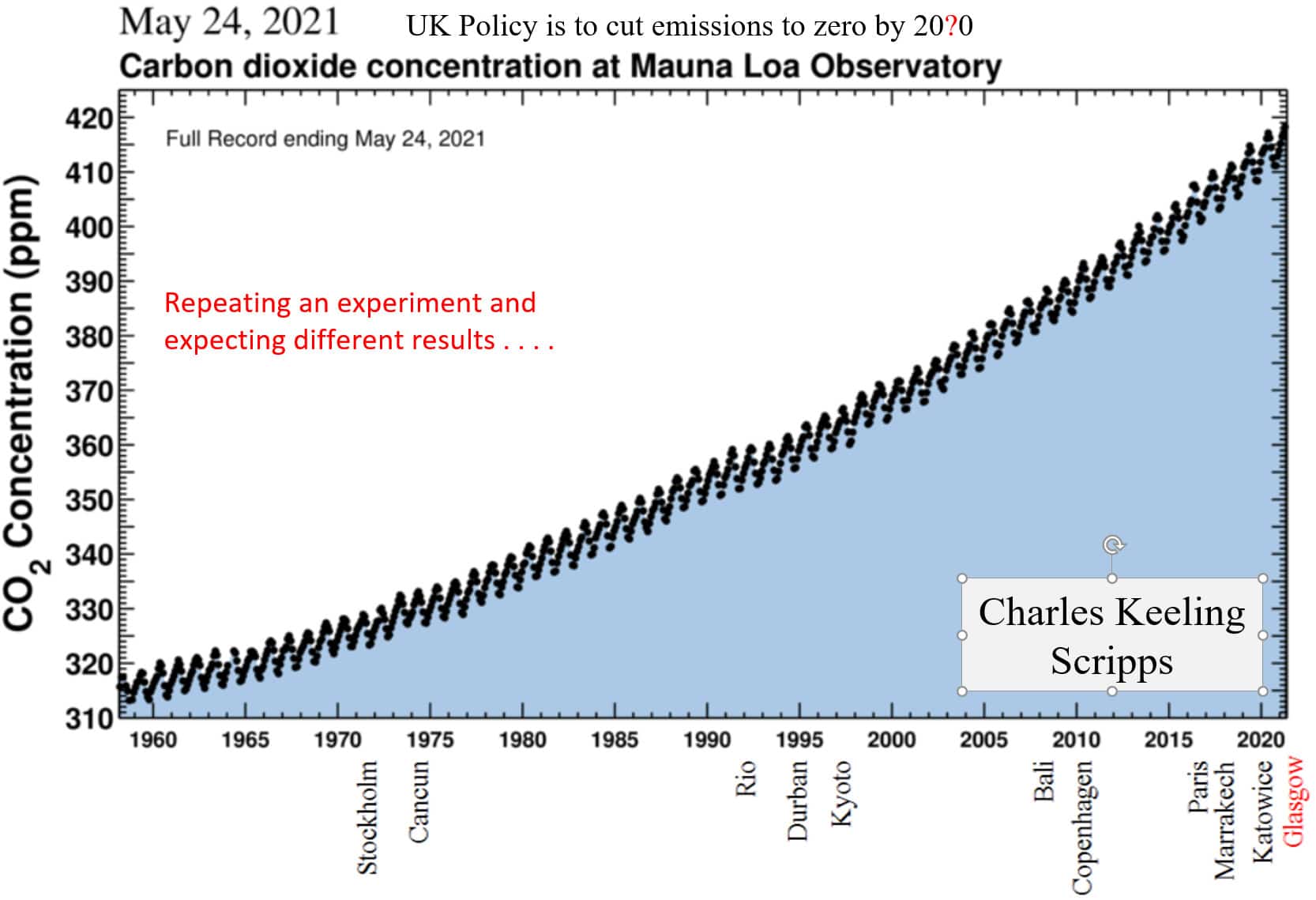 But if we could reduce carbon emissions to zero the concentration of atmospheric greenhouse gases will be what we have now plus what we will be emitting between now and the zero-emission date minus the amount taken up by the oceans.  This means that typhoons, floods, droughts, bushfires, sea-level rise, Arctic ice loss and damage to coral will all be worse, perhaps much worse than now. If you think that present conditions are not acceptable you have to conclude that zero is not low enough.  As well as reducing emissions we will HAVE TO remove greenhouse gases, probably with help from phytoplankton, and also do direct cooling a soon as we can and hopefully ramp it down as emissions reduce.

Although the amounts of energy removal needed to save polar ice, moderate hurricanes and reverse sea level rise by 2050 are nearly 40 times all present annual anthropogenic energy use, they are small, about 2%, of the world solar input. It follows that quite a small change in the reflectivity of the earth can restore historic temperatures. Work by Sean Twomey on the reflectivity of clouds, well replicated by Andrew Ackerman and regarded as robust, showed that reflectivity depends on the size distribution of the cloud drops. A large number of small drops reflects more than the same amount of liquid water in larger ones. This is confirmed by the statement ‘the dark storm-clouds are gathering’.

The optics of the Twomey effect can be demonstrated by glass balls of different sizes, 4 mm and 40 microns below. Schwartz and Slingo analysed Twomey’s observations. They showed that for quick mental calculations, doubling the number of drops increases reflectivity by about 5.6% over a wide range of cloud conditions.

The formation of a cloud drop requires a relative humidity very slightly above 100% and also some form of seed called a cloud condensation nucleus. These are plentiful over land but scarce in the cleaner air in mid ocean. John Latham suggested that the concentration of nuclei could be increased by spraying submicron drops of filtered sea water into the turbulent boundary layer of the lower atmosphere. The residues from evaporation would be dispersed like cream in coffee to a fairly even concentration through the boundary layer at the bottom of the troposphere. The solar energy that would be reflected from the extra liquid area when the water in one 25 micron drop is shared between two 19 micron drops is many tens of millions of times larger than the surface tension energy needed to make the extra condensation nucleus on which the second drop grew. Computer models show that, if the spray of the right size is released in the right place at the right time, about 10 cubic metres a second could restore preindustrial temperatures world-wide. The salt quantity would be about 1/500 of the salt in all sizes thrown up now by breaking waves. It is the number of successful drop nucleations that matters, not the salt mass.

Aerosol will be washed out by rain so spraying has to be continuous but this means that we have some regional and seasonal control of where and when we cool. Spray could be released from some hundreds of wind-driven vessels patrolling the oceans under control of climate planners on the basis of satellite data and the most powerful computers running ‘what if’ climate models.

As well as temperature reduction there are also effects on precipitation in both directions. The results of limiting spray to ocean regions have been studied by Stjern et al. at the Norwegian Cicero Laboratories. The results from the mean of nine climate models after a 50% increase in the concentration of condensation nuclei show large reductions in Arctic temperature and small but useful increases of precipitation in drought-stricken regions. Most of the reductions in precipitation are over the sea. This was a useful but extremely simple spray plan and with more knowledge of the climate system we should be able to obtain further improvements.

A particular climate change concern is the loss of Greenland and Arctic ice because of the difference between the high reflectivity of snow and ice compared with the high absorption of open water. Warming could release enormous amounts of methane from the shallow areas of the Arctic seabed and surrounding permafrost. For a short time in the summer there is more solar energy going into the Arctic than the equator and a surprisingly small number of migrating spray vessels could offset the product of lost ice mass times its latent heat.

The vessels can spend the rest of the year cooling the top 50 metres of the currents circulating from Cape Verde to the Gulf of Mexico and round to the Canary current or upstream of the Philippines. This could reduce sea surface temperatures to values selected by surrounding Governments to reduce the frequency and severity of hurricanes and typhoons.

Temperature gradients across the Indian Ocean have a strong effect on the balance between floods in Africa and bush fires in Australia. Moving fleets of spray vessels to east or west allows us to control this balance. Marine cloud brightening tends to strengthen summer monsoons and weaken winter ones. This gives us some control of their amplitude and phase. Provided that we can predict wind speed and direction (which will themselves be affected by spray) we can exert control over El Niño events and hot blobs which produce adverse effect on rainfall patterns. Cooling anywhere will eventually remove heat from deep oceans which is the main cause of sea level rise.

The best climate modellers give large caveats on their results and agreement between different models is not exact. The climate physics problems require new ways of using computer climate models to get a region-by-region and season-by-season transfer-function of the climate system.

Vessel design is well advanced. Design calculations and engineering drawings are available. For 0.8-micron liquid diameter spray at 30 litres per second the power requirement from the wind would be about 300 kW. The vessel water line length would be 45 metres and the displacement 90 tonnes. Energy comes from the wind acting on two Flettner rotors. The vessels would ‘fly’ on hydrofoils with variable-pitch which produces large alternating forces nearly perpendicular to the direction of travel driving hydraulic rams. If the 1940 cost of Flower class corvettes which had much higher displacement and engine power and which were built in similar numbers, can be index-linked to the costs of today, the mass production cost would be about £3 million each. About one hundred vessels in the right place at the right time would be needed to get the Stjern results. About four hundred vessels could remove the accumulated ocean heat over 20 years to reverse sea level rise. 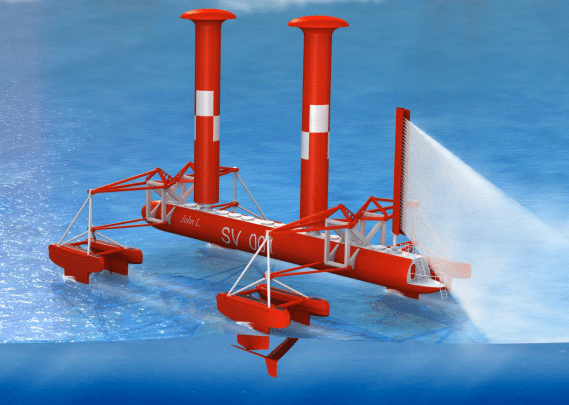 The engineering problems are all those of ocean-going vessels but with the addition of the problem of filtration of plankton from sea water. Sequential backflushing of a group of filters, originally developed for removing polio viruses from drinking water, is a promising method.