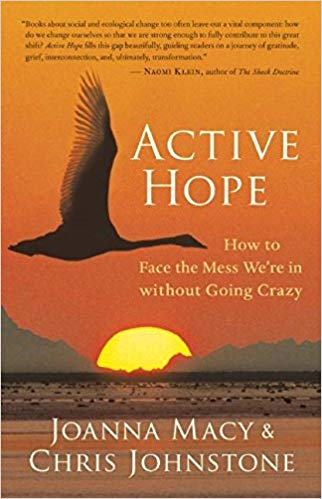 Humanity is currently suspended between the Reality of the present climate emergency, denial by the economic forces that benefit the few at the expense of all, the ignorant bliss of social media and cheap plentiful ‘entertainment’, lies of #DonaldTramp, and his minions (#DonaldsChumps) either ideologically blinded or lying for personal gain.

Those who understand the climate science are in a state of disbelief, shock and fear. Scientists themselves cannot share their personal feelings to avoid criticism of their objectivity. Humanity is in a self-imposed gridlock on the most serious existential challenge we have ever faced; dealing with ourselves, our desire for comfort, convenience and security, none of which are assured any more. That’s tough to accept… to get your head and heart around. Just go shopping instead.

It is easy to go into a state of depression, dejection, and inaction. Why try when all is lost?

‘Hope’ is a complex word. It can imply ‘magical thinking’, as in hoping something into existence, or passivity, as though ‘hoping’ itself was enough. Or it can be the seed of action, called #ActiveHope. It is that kind of hope we need to inspire in you all, and to have you to inspire in others through your actions.

The Creation of Society’s Shared Hallucinations

. . . then share it as widely as possible. It will fertilize the seeds of #ActiveHope in everyone you share it with.