Most scientists specialize in narrow fields of study and are employed by entities that restrict what they can publicly report about their own scientific findings.

As such, the public rarely gets to see the “big picture” clarity of truth that should be at the heart of our collective efforts to prevent the worst effects of climate change before our ecosystem can no longer support the human species.

In my talks, I try to weave together the wisdom of eight “big picture” scientists—in an effort to provide a rare and powerful fabric of clarity that will lead to urgent, globally-coordinated action to slow, stop and/or prevent the worst effects of climate change.

This piece begins with two of the deceased scientists on my list:

1. Jacques Cousteau needs no introduction. After researching many global trends over more than five decades, he made the following statement at the age of 87, shortly before his death in 1997–nine years after Dr. James Hansen presented his alarming climate change warnings to the U.S. Senate.

It is already too late. We’ve passed the threshold. The beginning of the end has started. Humankind may, or may not be, part of the plan nature has for the Earth in the future. Life will be reborn, but first the world as we know it now will die.

Apparently, he had concluded that we were past the tipping point regarding possible human extinction over twenty years ago.

2. Robert Goodland, Ph.D. was the first environmental specialist employed by the World Bank in Washington, DC., where he worked for 23 years. In 2009, he and colleague Jeff Anhang published a research paper on World Watch, in which he drew the following conclusion: 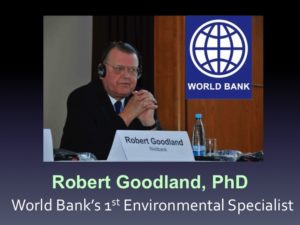 Our analysis shows that livestock and their by-products actually account for at least 51 percent of annual worldwide GHG emissions.

In 2013, shortly before his death, he updated that conclusion: “There seems to be only one remaining pragmatic way to reverse climate change before it’s too late–and that’s by taking quick and large-scale actions in food, agriculture, and forestry.”

Why is Robert Woodland’s work still relatively unknown? It’s because of the “protein myth”–a widely-held belief that we truly “need” to eat animal protein to be healthy. We don’t, but most of the world’s scientists believe that we do. And that leads to what I call “locked brain” syndrome. What a pity!

Just imagine what could happen if all scientists were fully informed about the fact that what we eat could be a powerful game-changer when it comes to climate change. The good news is that the false basis of “locked brain syndrome” has been laid to rest by the next scientist on this list—and documented in his book that features clinical evidence from a host of prominent physicians.

Sadly, most of the world has not listened to the absolute necessity of addressing what is quite likely the leading cause of climate change.

3. T. Colin Campbell, PhD., Nutritional Science, Cornell. His 50-year body of work as it relates to human nutrition is well documented in The China Study, a best-selling book he published with his son, Tom Campbell, MD in 2005. 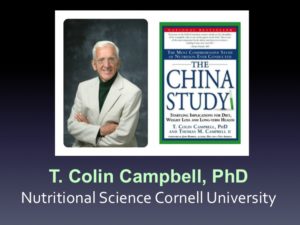 His book is what inspired Bill Clinton to stop eating meat — as it contains solid scientific and clinical evidence that we can easily prevent, and even reverse, most chronic diseases (including heart disease and cancer) simply by shifting to a diet consisting mostly of whole, plant-based foods. His definition of the optimal diet for humans:

“The closer we get to eating a diet of whole, plant-based foods, the better off we will be.”–T. Colin Campbell, PhD

These alarming findings, coupled with the devastating ecological price we’re paying for our preference for animal-based foods, represent the greatest win-win in the history of humanity. Superior health, a fortune saved on healthcare, and a bonanza for the environment are among the many rewards for eating plants instead of animals. Think about this “factor” of ten:

On a per-calorie basis, on average, animal-based foods require over ten times as much land, water and energy as do plant-based foods.

Given the singular importance of all of the above, Dr. Campbell added this comment to the Introduction of his second book, WHOLE:

What we eat individually and collectively, has repercussions far beyond our waistlines and blood pressure readings. No less than our future as a species hangs in the balance.–T. Colin Campbell

4. Stephen Emmott, PhD. A physicist, visiting professor at the University of Oxford and the Director of Computational Science at Microsoft in the UK, Dr. Emmott overseas a team of scientists who continually study global trends that affect our lives. Knowing him and his work, I would suggest that he could possibly be the single most informed scientist on the planet when it comes to the “big picture” of human civilization. 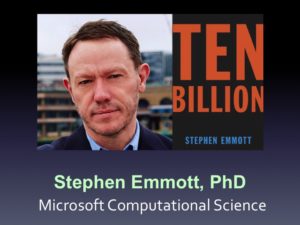 In his powerful 2013 book, TEN BILLION, he ends that one-hour read thusly:

As a scientist, what do I think about our current situation? Science is essentially organized skepticism. I spend my life trying to prove my work wrong or look for alternative explanations for my results.

I hope I’m wrong. But the science points to my not being wrong. We urgently need to do–and I mean actually do– something radical to avert a global catastrophe. But I don’t think we will. I think we’re f______.”

5. Peter Wadhams, PhD. Professor of Ocean Science, University of Cambridge. I have been following his work closely for the past two years and met him in February of 2018. I have concluded that he is the world’s leading scientific authority when it comes to the Arctic Ocean and its impact on climate change. See his 2016 piece at Yale.edu:
Global Impacts of Rapidly Disappearing Arctic Sea Ice. 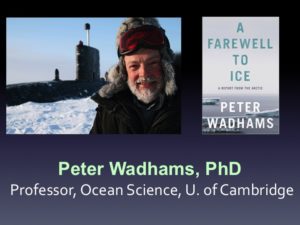 Wadhams is expecting an ice-free Arctic by 2020–a conclusion that is far earlier than the conventional (political) wisdom of the IPCC, which he labels as being “guilty of criminal complacency.” Given the dire worldwide implications of a near-term ice-free Arctic, his conclusions are chilling—in light of the fact that no meaningful action has been started, planned or funded regarding what he describes as “our only chance”:

Our only chance is to urgently begin removing CO2 from the atmosphere. –Peter Wadhams, PhD

6. Guy McPherson, PhD. Professor Emeritus, Environmental Studies, University of Arizona. He is, by far, the most controversial person on my list of eight “big picture” scientists. He is controversial because after fifteen years of studying species extinction, he has concluded that our civilization will collapse within the next few years and that humans will go extinct before 2030. 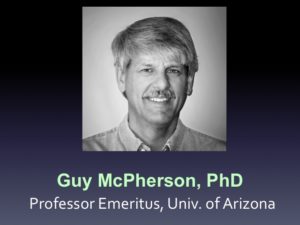 For those reasons, I concluded that he could very well be one of the most informed scientists in the world when it comes to species extinction. Who am I to say that his conclusions about the near-term collapse of civilization and the imminent extinction of the human species are wrong?

As you might expect, he does have detractors. In a 2017 piece in the Washington Post, a prominent atmospheric scientist, Michael Mann, PhD, of Penn State, referred to Dr. McPherson as a “doomist cult hero.” I notice that Dr. Mann has not demeaned the other four scientists on my list who have drawn similar conclusions–although just over a longer timeframe: Cousteau, Emmott, Lovelock and Fenner. The title of that WAPO piece was “Doomsday scenarios are as harmful as climate change denial.” I disagree.

7. James Lovelock, PhD. London School of Hygiene and Tropical Medicine. A true independent scientist who has occasionally worked as a contractor for NASA, he is best known for his GAIA theory, a belief that the Earth is a self-regulating system. Still alive and well at 99, this quotation summarizes his sincere feelings about our future as a species. In a 2010 BBC documentary at age 91, he stated: 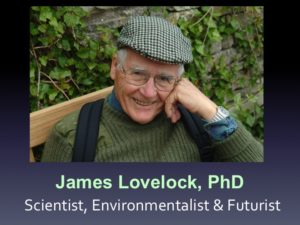 When you see the whole picture, it is really fearsomely bad…I fear that not many of us will survive, at best about a billion–possibly a lot less than that.

8. Frank Fenner, MD. Scientist and Environmentalist. He is best known for leading the overall project that resulted in the eradication of smallpox. Likely the most famous and awarded scientist in the history of Australia, just one of his many awards is the Albert Einstein World Award for Science in 2000. Here are the last few lines from his 2010 New York Times obituary: 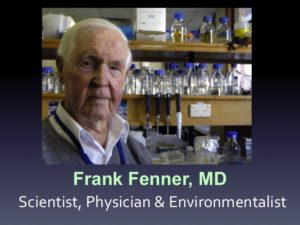 Professor Fenner’s views on the environment were not cheerful. Sheer numbers and the rapacious consumption of resources, he predicted glumly, would condemn the human species to the same fate as the smallpox virus.

“Homo sapiens will become extinct, perhaps within 100 years,” he told the newspaper The Australian in June. “A lot of other animals will, too. It’s an irreversible situation. I think it’s too late.”

The Bottom Line. Each of these eight “big picture” scientists all share deep concern about climate change and its importance when it comes to the future of our civilization and our species. Most of them would agree that government-funded, globally coordinated, emergency action must be undertaken ASAP in the five categories listed below.

Although these actions are crucial to our long-term survival, most of these scientists have little confidence that our feckless world leaders are up to the challenge.

5 Steps to Making our Planet Livable for the Long Term

1. Reduce the global population to a sustainable level.

3. Abolish animal agriculture throughout the world. (Not all agree on this one)

5. Aggressively pursue geo-engineering options* for lowering the carbon concentration in the atmosphere.

*The annual price-tag for the geo-engineering initiatives will be many trillions of dollars. But most of the scientists agree that this is a key element in preserving our planet’s ability to support the human species.

End Note: As for the eight scientists covered in this piece, I am best acquainted with Dr. T. Colin Campbell and served on his Center for Nutrition Studies board of directors from 2012 to 2018. I have met individually with Dr. Wadhams and Dr. Emmott and have communicated extensively via email. I have also gotten to know Dr. McPherson via email and phone and was just getting to know Dr. Goodland a few months before his death in late 2013. Later, I attended his memorial service in early 2014 at George Washington University, an event that featured an in-person testimonial by U.N. environmental leadership. I have had no direct contact with Lovelock, Fenner or Cousteau.