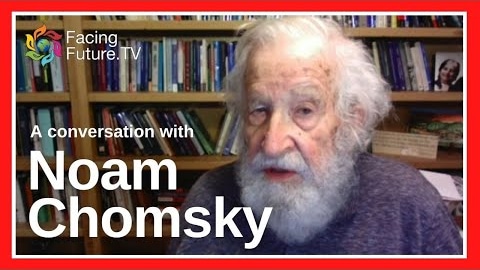 A Conversation with Noam Chomsky

Stuart Scott and Noam Chomsky discuss their views about death and the afterlife, as well as the critical need for activism to produce change. Co-hosted by Dale Walkonen, FacingFuture is honored to present Professor Chomsky’s ideas about politics, economics, OPEC, nuclear proliferation, and disinformation, all of which have moved the hands of the Doomsday Clock to 100 seconds before midnight.

He fears that if climate deniers hold the reins of power, the clock may well reach midnight. But
Noam finds hope in young activists like Greta Thunberg, Alexandria Ocasio-Cortez, and in the Sunrise Movement. He notes that the New Deal happened because there was overwhelming public pressure on FDR to act decisively. The Green New Deal will require no less effort. Stuart advocates going to the offices of our leaders to demand action.

Noam tells us that although we’re living in a world of total illusion and fantasy, we have to dedicate ourselves with energy and commitment to using the opportunities that we have. Then, there is a chance that we will survive.